The Letters of Peter H. Burnett: Realism and the Roots of California 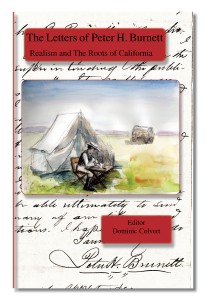 Everyone delights in the discovery of historical facts. But more importantly the truth of history brings self knowledge and guidance on how to live the good life. The truth about the role of Peter H. Burnett is too often distorted in modern-day myths. A realistic view has the power to alter our perspective on American history.

Nineteenth century Californians were entangled in conflicting ideas that led to a fearful war. Burnett’s journey in the realm of ideas, mirrored in that of others such as President Lincoln, hearkened to the Western symbol of freedom—the sovereignty of the people and the dignity of persons.  The reader will find in the primary documents and Prologue of The Letters of Peter H. Burnett an intimate view of the epic struggle to create a harmonious society in the Far West.

“The publication of these lively letters further testifies to the fact that Peter H. Burnett, California’s first governor, remains an important figure not only in the political history of California but in its intellectual history as well. These letters reveal a Founder who epitomizes what the California-born philosopher Josiah Royce described as the Higher Provincialism emerging from the first frontier.” —Kevin Starr

” I congratulate you for providing a nuanced reappraisal of California’s controversial and complex first American governor, along with selections of his correspondence that shed welcome light on mid-century California.” —Gerald McKevitt S.J.